through the heart of Central and Eastern Europe ON EUROVELO 9

The EuroVelo 9 cycling route is part of the European Long Distance Cycling Route Network. In a few years, it will connect the Polish Baltic Sea coast with the Croatian Adriatic Sea on about 2,050 kilometres of cycle paths: The route will then run from Gdansk on the Baltic Sea across Poland, the Czech Republic, Austria and Slovenia to Pula in Croatia.

By the way: The transport connections (train, bus or car) along the entire cycling route are excellent as well. Tip for the retourn journey: RailJet from Graz to Brno!

A tour through wine-growing regions, large cities and historic towns

Through wine-growing regions, from thermal spa to thermal spa, through large cities like Vienna and many small, historic towns like Hartberg or Bad Radkersburg: This cycling route could hardly be more varied.

Gourmets will go into raptures over Styrian delicacies such as wine, pumpkin seed oil and chestnuts in autumn.

And besides the exciting sights along the route, relaxation plays a major role as well: A visit to the hot springs of the total of nine thermal spas along the cycling route – six of them in Styria – will soothe your body and soul.

EuroVelo 9 in a nutshell 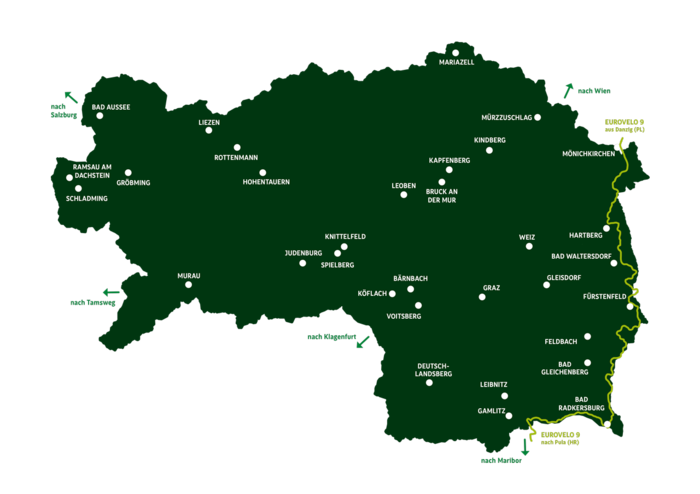 From the Czech Republic across Austria to Slovenia

Starting in the small town of Blansko, the route leads cyclists through the South Moravian Karst to Brno. The second largest city in the Czech Republic is famous for the UNESCO World Heritage Site Villa Tugendhart. In addition, Brno is also connected to Graz by RailJet – perfect for anyone wanting to combine cycling and rail travel. The route continues through the Pálava Mountains and via Břeclav to Austria.

In Lower Austria, lanes lined with wine cellars – typical of the Weinviertel region – serve as prime examples of the art of Austrian wine culture. Via Vienna, the Vienna Woods and the Vienna Alps, the journey continues to Eastern Styria. Due to the culinary variety of products and their quality, this region is also often referred to as the "garden of Austria".

The route also runs through the Spa Country of Styria to eventually end in Maribor, Slovenia's second largest city. Here the EuroVelo 9 crosses the Drau Cycle Path, which runs to Legrad in Croatia, where the Mur Cycle Path ends.

Material cultural assets in the form of historic castles such as Schönbrunn, Laxenburg or the Castle Road in Styria, on the one hand – impressive customs and traditions in individual countries, on the other: It's this interplay that makes this cycling route a truly special cultural experience.

EuroVelo 9 is hard to beat in terms of diverse cultural landscapes:

A wealth of water

The tour on EuroVelo 9 is an exploration of healing waters, warm thermal springs and dreamy river landscapes. They include Aqualand Moravia, Therme Wien, Römertherme Baden and the Spa Country of Styria – the largest contiguous thermal spa region in Europe with six thermal spas – as well as the Danube and the Mur, Austria's second largest river.

A cycling tour on EuroVelo 9 is a foray into historically-inspired cuisines. The influences and the coming together of different cultures during Habsburg times are reflected on the countries' menus: Desserts such as strudel and dumplings, pancakes and Kaiserschmarren are bound to tickle your taste buds.

Wine lovers will feel right at home on this route, too: After all, it leads right through renowned Austrian wine-growing regions – among them, the Weinviertel, Vienna, the Spa Country of Lower Austria, as well as the Volcanic Region of Styria and southern Styria.

EuroVelo 9 combines physical activity with adventures and relaxation: The offers are as varied as the cycling route itself. For culture lovers or pleasure seekers – there's something for every taste.

Useful information for the EuroVelo 9

All good cycle paths come in threes (or more)