Open
A beautiful hike through wonderful forests, meadows and through the wine trail of the Silberberg technical school.
The Heimschuher Basin, which was formed by the erosion of the Sulm River south of the Sausal, was a barren alluvial landscape in early times. It was hardly suitable for settlement activities, and so the first remains of settlement by the Illyrians can be found on the Königsberg to the west of the village. A ring wall and isolated tumuli indicate this. The Roman road that connected Flavia Solva with the provincial capital Virunum also led westwards along the southern edge of the Heimschuher basin. That is why today's parish church is not, as it seems, out of the way, but was built on the edge of this traffic route. Old wayside crosses and Roman-era burial grounds still mark the course of this road today. Its documented history began more than 1000 years ago when the German King Otto I (936 - 973) donated his possessions between Sulm and Laßnitz and from the Murebene to the Koralpe to the Archbishopric of Salzburg.

Coming from the south, north, west and east on the A9 Phyrnautobahn - exit Leibnitz - continue in the direction of Kaindorf/S. - Heimschuh.
The Heimschuher Rundwanderweg Nord trail starts at the Heimschuh municipal office, first crosses the Sulm bridge, then turns left onto the municipal path along the Sulm. After crossing the main road, you reach the Wellinggraben via the pond forest, from where the ascent to the Fastlkogel begins. Passing the Schneeberger winery, you descend via Buchkogel and Pernitschkogel into the Muggenau valley, from where the next ascent is via Kittenberg and Innerberg past the Kratzer wine tavern to Kreuzkogelwarte. From the Kreuzkogel, the highest point of the route, the path leads down along the educational wine trail to the Silberberg technical school. After a short stretch along the main road towards Sulmsee, the route turns left into the forest. After crossing the Sulm over the "Eiserner Steg" (iron footbridge), you return to the starting point along the R1 footpath and cycle path.
Visit the Hartlieb kernel oil mill and museum.
We take the train to Kaindorf a.d. Sulm. www.oebb.at
Continue by taxi to Heimschuh. T: 0043 (0)664 886 57 826
Parking is available right next to the cafe-pub Bicycle.
Tourist Office Südsteiermark
Hauptplatz 40
A-8530 Deuschlandsberg

1°C
5%
5 km/h
Sunny and cloudy periods will alternate throughout the day.
Morning 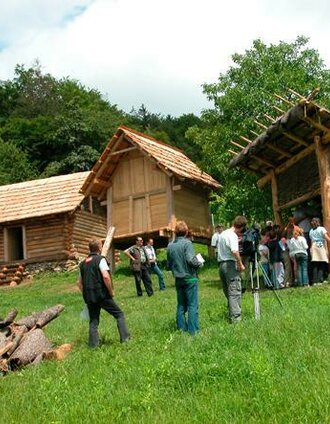 Hiking in the South Styria Nature Park - experience nature at its best! 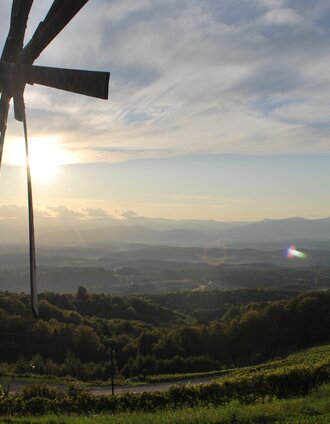 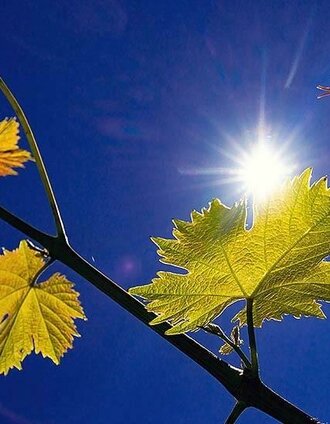 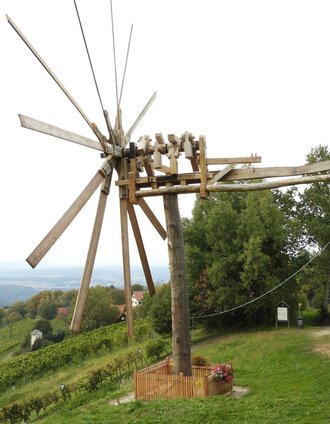