Schmuckbauerwirt - St. Anna - the bike tour for the brave

Open
Why for the brave? Because the Schmuckbauerwirt - St. Anna bike tour in southwest Styria has a wonderful feature that only a few bike tours can boast.
The "roof of the tour" is visible very early on this mountain bike tour. Experienced mountain bikers and cyclists know that if the highest point of a tour can be seen very early on, it automatically means that there is still a long way to go. So it takes a lot of courage and stamina not to be impressed by this and possibly even to turn back. In any case, the reward for the effort is repaid to the mountain biker many times over. Because anyone who has not yet viewed and enjoyed the Schilcherland from the Schmuckbauerwirt and St. Anna has not yet been here. In a nutshell: the Schmuckbauerwirt - St. Anna tour will be one of the highlights of your cycling holiday in Schilcherland.

The "Schmuckbauerwirt - St. Anna" tour is the cycling tour of your choice if you have

The Schmuckbauerwirt tour is demanding, which can already be seen a little from the tour's key data of 40 kilometres in length and around 1,000 metres in altitude. And it is also well known among connoisseurs of south-western Styria: The climb over the Buchenberg to St. Oswald and then on to the Schmuckbauerwirt is a tough one. It drags on, so to speak. In addition, after only a few kilometres on the ascent of the Buchenberg, you can already see northwest to St. Anna and thus get a good impression of where the tour is heading.

As in "real" life, however, you should not let this rob you of courage. Because especially in cycling and mountain biking the following applies: the way is the goal. And especially this path in the form of the bike tour to the Schmuckbauerwirt and to St. Anna offers a lot. First of all, just the almost unique feature of enjoying an unbelievably wide view of southwest Styria almost throughout the entire tour. On the ascent over the Buchenberg to St. Oswald, you can enjoy the view across to St. Anna, down to Vordersdorf, Wernersdorf and Wies, as well as up to the Soboth and the triangle. The Buchenberg ascent is quite gentle over long stretches with a gradient of around 5%, only in between do a few steeper ramps with 8-10% gradients challenge the thigh muscles a little. So there is plenty of time to enjoy the area.

In St. Oswald, at least a short break at the village square with a view of the church and the beautiful estate of the Prince of Croy family is definitely worthwhile. If you feel like it, you can also drop by the open-air swimming pool and take a plunge in the water.

From St. Oswald, the route goes downhill for a short while, but the experienced cyclist knows: what you cycle downhill before reaching the highest point of the tour, you have to cycle up again later. And that's just how it is in southern Styria. It is not said that you have to cycle the 9 kilometres between St. Oswald and the Schmuckbauerwirt without a break. Even e-bike riders would be advised not to do this. The reason is easily explained: the places you will find along the way are too beautiful, the locations that invite you to linger are too quiet, the berries of the Koch family are too delicious and the waterfall of the Weisse Sulm is too attractive (turn-off signposted to Koch's Beeren). Time for short breaks should be planned if you are not doing the tour in training mode.

At the Schmuckbauerwirt itself (regular closing days are Mondays and Thursdays, opening times may vary from person to person), it pays to stop for a refreshing drink or a snack. It's too beautiful up here to continue straight away.

The same applies to the dreamy little village of St. Anna, which boasts a church, a cosy little village square and an equally wonderful view. Here, too, it pays to take your time on a biking holiday and really immerse yourself in this place and the region.

Last but not least, there is a wonderful downhill from St. Anna via Unterfresen and the Strutz Alpine Inn down to Vordersdorf and Wernersdorf. On this section, it is recommended to make a short detour in Unterfresen to the Gesteinsgarten (rock garden) and to the Alpengasthof Strutz with its Strutz Mühle (mill), known as the winner of the TV programme "9Plätz 9Schätze".

A pleasurable final highlight could be a stop at the Safran - Filatsch inn in Aichberg. Once you have arrived there, you are as good as at the finish line and after a refreshment stop you can relax and cycle back down to Eibiswald without any further exertion.

PS: The choice of bike is easy. Since it is a continuous asphalt trail (except for the few metres to the waterfall of the Weisse Sulm), any mountain bike (mountain bike, gravel bike, road bike) is suitable.

Plan your journey via Google Maps to the starting point of the tour: www.google.at/maps

Directions from Graz / Vienna to Lieboch:

Take the motorway towards Graz (A2) to the Lieboch exit. Continue on the B76 in the direction of Eibiswald.

Drive over the Radlpass on the B76 towards Eibiswald.

Asphalt all-year tour, especially in bad weather, at the start and end of the season The tour starts at the church in Eibiswald and leads left across the market to the main road, turn left, at the Sparzentrum turn right through the village of Aibl, at the main road turn right again to Gasthof Bachseppl , take the cycle path over the bridge, right 200 m uphill, at the sign 2 Rivers Tour turn right downhill, then uphill to the left bend at the transformer, then it's left to Biosi Kreuz up the Buchenberg to St. Oswald. Oswald. There you first go down again, after the right-hand bend you will see the Kaiser pond on the right, then downhill for a bit and then uphill again into the Wiel. At the transformer, turn right and then immediately left, following the signs to Koch's Beeren. Approx. 1 km after Koch`s Beeren you have a wonderful panoramic view and can see the churches of St. Katharina in der Wiel, St. Oswald and St. Pongratzen, as well as Sulm- and Saggautal . Immediately afterwards is the entrance to the spectacular Sulm waterfall, absolutely worth seeing. At the bridge you can see the upper part of the waterfall. After another 700 m, you reach the highest point, the Schmuckbauerwirt at 1050 m. Here, you continue to the right along a path. Here you continue to the right past a beautiful pond with a panoramic view 5 Tour MITTEL to St. Anna. At the signpost at the end of the village there is another wonderful panoramic view:  Bad Schwanberg, Deutschlandsberg, Stainz and Graz. Then it's 200 metres in altitude and about 2.5 kilometres downhill and shortly after the Ebenbauer farm, when you re-enter the forest, turn right, shortly after a sharp right turn and then the other side of the panoramic ride begins to Wielfresen. From there you have a magnificent view into the Sulm and Saggau valleys, to St. Pongratzen and Slovenia. At the state road, turn left to Gasthof Strutz, which runs its own fish farm and has faithfully rebuilt the Strutzmühle (Austria's most beautiful square 2020, known from "9Plätze 9Schätze"). Then ́s downhill to Wernersdorf and Vordersdorf. In Wernersdorf you will find the famous Emmaus Chapel. In Vordersdorf, before the bridge, we turn right, past the chapel, up the last climb to the Buschenschank Körbisch vlg. Gartenbauer . Here you can choose between a hearty snack at the Buschenschank or a tasty meal 200 m further on at Gasthof Safran vlg. Filatsch, where there are also cosy rooms! Simply take several tours. Straight ahead again via the farmers' cooperative, main school, cemetery, roundabout to the church in Eibiswald.
At Wielfresen, take a detour to the Strutz Mill - Austria's most beautiful place 2020.
With ÖBB to Wies, then by bus or guest taxi to Eibiswald.

With the BusBahnBim app of the Verbundlinie, timetable information has never been easier: all connections by bus, train and tram in Austria can be queried by entering places and / or addresses, stops or important points. The app is available as a free app for smartphones (Android, iOS) - on Google Play and in the App Store.

There is ample parking near the church square.

Plan directions via Google Maps to a nearby car park for the tour.

Map with all mountain bike tours available at the businesses and at the tourist office Schilcherland Eibiswald-Wies or can be ordered at Schilcherland.at!

-1°C
0%
5 km/h
Early clouds will clear to leave the region with a dry and sunny day.
Morning 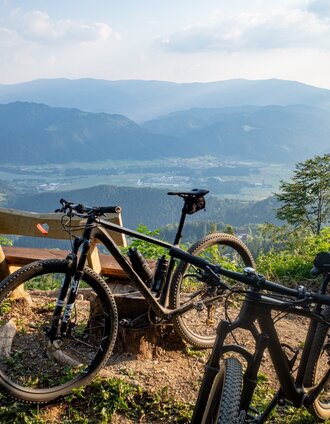 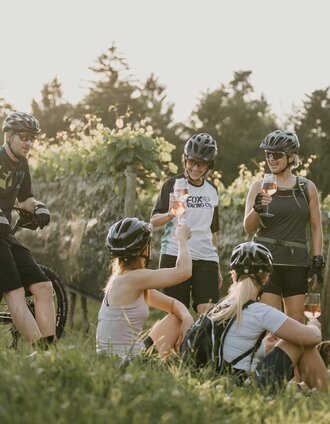 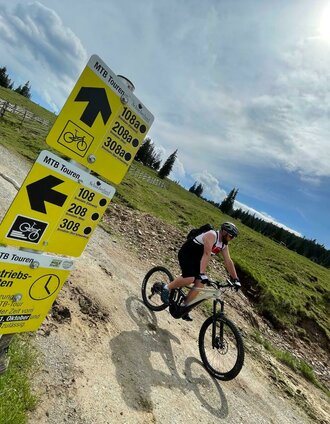 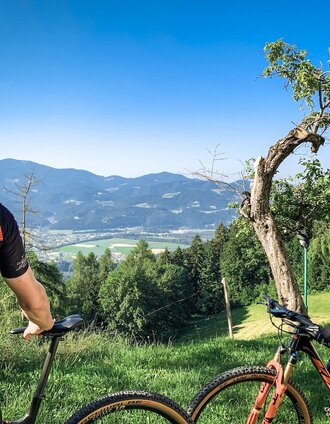 Nandlrunde - La Doyenne. A round through Luis' office. 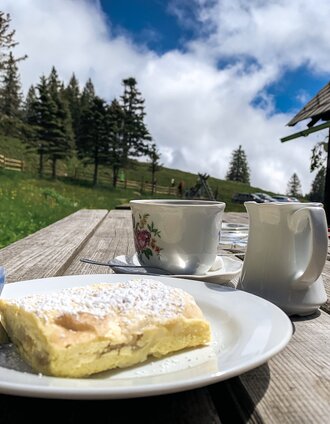 Schirchleralm Tour - We only have to want... 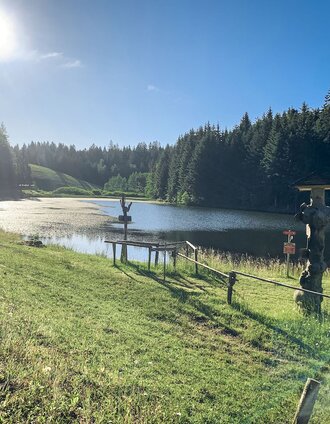 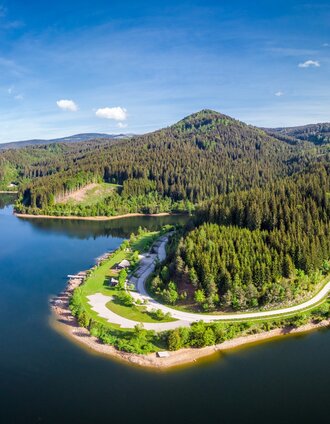